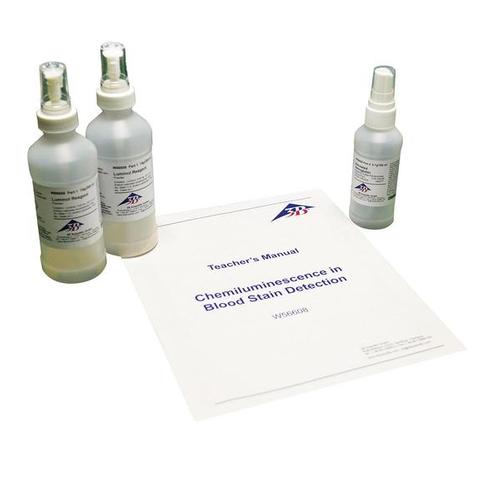 The Chemiluminescence in Bl sets up this crime scene scenario:

Crime scene investigators are called to the scene of a possible violent crime. They examine the scene for evidence, such as fingerprints, hair, fibers, etc. After collecting the evidence, they notice there is no visible blood. Someone takes out a spray bottle and begins to spray the area with a liquid. After the area is covered with spray, they turn out the lights. A strange, faint glow appears in certain areas of the scene. Learn how luminol is used in scenes like this everyday. The special Luminol formulation does not require a separate hydrogen peroxide catalyst. Simply re-hydrate and use with the simulated blood hemoglobin to show your class. This activity includes an Instruction Manual with suggested activities. There is enough material for several demonstrations.

Chemistry of Who done it? Lab - Crime Scene Investigation Lab
$ 158.00
by 3B Scientific