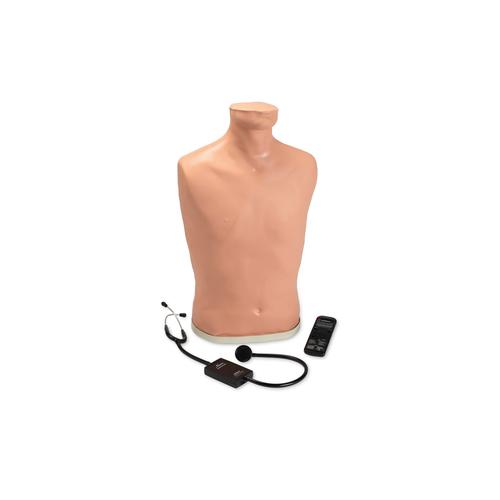 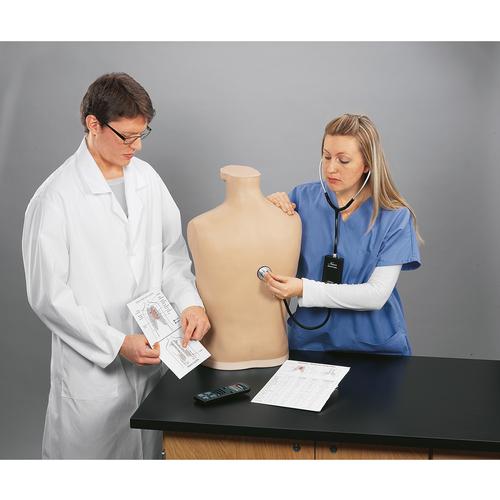 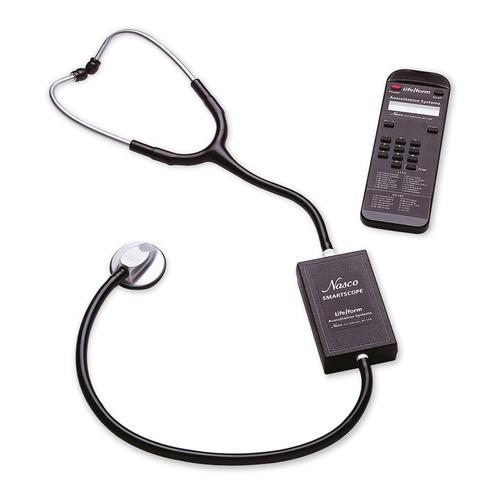 The instructor selects from a menu of heart and lung conditions by wireless remote control. The manikin presents itself as a real patient without visible auscultation sites. The student must palpate to identify correct auscultation locations, and will hear different heart and lung sounds as the Smartscope™ is moved to different locations on the manikin. A diagnosis of the condition selected by the instructor can be made by comparing the variations in sounds occurring at different sites. Just like a real patient! Lung sounds can be detected at five anterior, 10 posterior, and two midaxillary locations. Students can practice auscultation at six anterior heart sites. The remote control does not have to be pointed directly at the manikin or SmartScope™ to operate. One remote control will operate all SpartScopes™ within a 100 ft. range. Great for group instruction. Listen to the sounds by either using headpieces on SmartScope™ or by connecting to an amplifier/speaker (not included). Range on the unit is up to 100 ft. of remote access. Includes manikin, one remote control with LCD display, one SmartScope™ with single- and dual-user headpieces, and hard carry case. Operates using two “AA” and two “AAA” batteries (included).
Lung Conditions to Select with the Remote: Bronchovesicular, Bronchial, Cavernous, Coarse Crackle, Egophony, Fine Crackle, Friction Rub, Infant, Mono Wheeze, Normal Lung, Pectoriloquy, Pulmonary Edema, Rhonch, Stridor, Vesicular, and Wheeze. Heart Conditions to Select with Remote: Aortic Regurgitation, Atrial Septal Defect, Holosystolic, Midsystolic, Mitral Stenosis, Normal, PDA, Pulmonary, Stenosis, S3 Gallop, S4 Gallop, Systolic Click, and VSD.

Pregnancy Pelvis Model in Median Section with Removable Fetus ...
$ 707.00
by 3B Scientific

Epidural and Spinal Injection Trainer
$ 1,962.00
by 3B Scientific

Wearable Breast Self Examination Model
$ 1,511.00
by 3B Scientific